As of April 10th, MAÏSADOUR Semences became MAS Seeds to show its innovative and international ambitions

Without the word « maïs », the new name is emphasizing the diversity of species (corn, sunflower, winter oilseed rape, sorghum, alfalfa, and others). The colors highlight its attachment to MAÏSADOUR COOPERATIVE GROUP, main agricultural cooperative in the South of France, which make a turnover of 1.4 Billion €.

MAS Seeds makes 85% of its turnover outside of France and invests 15% of it in R&D. This new brand will support the company’s strong ambition which is to triple the turnover by 2026 and become a major player in the international seed business

As a company with an annual 25 000 ha of production capacity representing around 2.5 million of seed bags and a turnover of 140 million €, MAS Seeds is a MAÏSADOUR Cooperative Group Subsidiary and a specialist of field crop hybrid breeding, production and commercialization. MAS Seeds is one of the main corn and sunflower hybrid seed companies across Europe and has two thirds of its production is made in the South-West-France.

To develop at the international with strong French roots

Present in 40 countries, with 12 subsidiaries abroad where 50% of its employees are located, MAS Seeds is always part of an extremely globalized market.  Its roots in the South-West of France are a major asset because it is a territory recognized for the quality of the seeds. France is the 1st seed exporting country worldwide, and the South-West is the 1st European field crop seeds exporting region.

MAS Seeds belongs to MAÏSADOUR COOPERATIVE GROUP, the main agricultural group in South of France with 1.4 billion € turnover is owned by several thousands of farmers. MAS Seeds and MAÏSADOUR GROUP are developing together agronomic and digital farming projects and bringing innovative services to farmers.

10 years of presence in Ukraine and Russia

Present in all the European Union since 2007, MAS Seeds expanded its business area to Ukraine and Russia 10 years ago in order to develop production areas, research centers and a seed factory. In 2018 MAS SEEDS will pursue this strategy with opening of a new research station and local subsidiary headquarter on June 1st, in Borispol, near Kiev.

Supported by a strong international brand and by an offensive strategy, MAS Seeds has the following ambitions for 2026:

The new logo represents innovation. Seed inside of the “a” aims to illustrate the heart of the seed profession and also represent the road towards the future. With the same colors than MAÏSADOUR Cooperative Group, it highlights the attachment of MAS Seeds to its main shareholder.

Lastly, a new baseline “UNITED TO GROW” completes this new logo. It reminds the importance of cooperating to innovate, to develop worldwide, and to grow together, united around founding cooperative values.  It comes from the ground as the plants from our seeds. 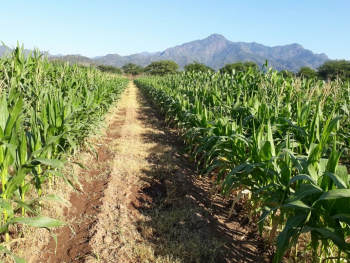 MAS Seeds and FGI announced today they have entered into an agreement for FGI's tropical corn breeding program. 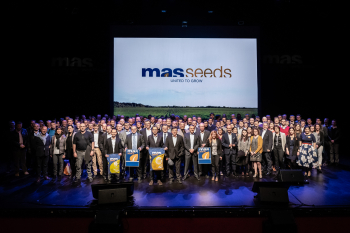 As of April 10th, MAÏSADOUR Semences became MAS Seeds to show its innovative and international ambitions